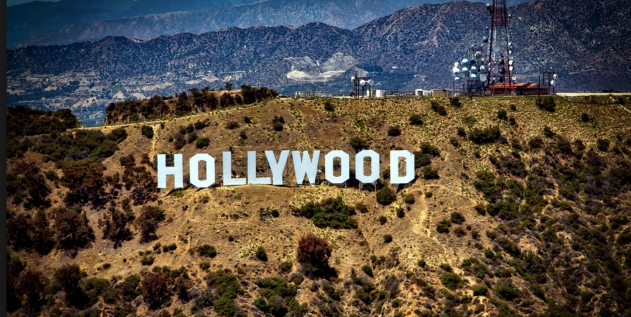 Synonymous with movie glamour, the iconic Hollywood sign was originally a real estate billboard.  Bet you didn’t know that then!

It is situated on Mount Lee, in the Hollywood Hills area of the Santa Monica Mountains. The sign overlooks Hollywood, Los Angeles. The “billboard” is massive. Each of the original 13 letters was 30 feet wide and approximately 43 feet tall, constructed of 3×9′ metal squares rigged together by an intricate frame of scaffolding, pipes, wires and telephone poles. The whole sign was studded with around 4,000 light bulbs. The sign flashed in segments: “HOLLY,” “WOOD,” and “LAND” lit up individually, and then the whole. Below the Hollywoodland sign was a searchlight to attract more attention. The cost of the project was $21,000, equivalent to $301,629 in 2017 and was built by Los Angeles Times publisher Harry Chandler.

All of this material had to be dragged up precipitous Mt. Lee by laborers on simple dirt paths by mules.  Originally intended to last just a year and a half, the Hollywood Sign has endured more than eight decades – and is still going strong.